MAP01: Tardy, but Not Dead, aka the School map, is the primary hub map of Ghoul School 3D. It consists of McCool High School campus during an undead apocalypse. It was designed by Mike MacDee (Impie) and uses the music track "".

Every few minutes or so, ghosts (referred to as G-G-Ghosts!) will spawn on the map and animate the first monster corpse they come to. You'll want to save as many humans as possible during the initial ghoul attack: more dead humans means more zombies to be reanimated by the ghosts. 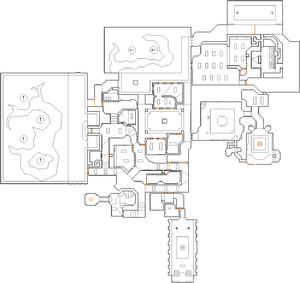 Map of Tardy, but Not Dead
Letters in italics refer to marked spots on the map. Sector, thing, and linedef numbers in boldface are secrets which count toward the end-of-level tally.

Spike's main objectives are to open the basement door, and the yellow and green doors. Grab everything in the starting room, then head south to the indoor lockers and get the Water gun. Fight your way to the office at the center of campus and grab the Rivet gun on the bookcase. Then use the intercom system to open the sealed cafeteria doors.

Principal's Office The principal's intercom system also controls the basement door. Use it to open the basement and gain access to the Underworld portal.

Science Lab The main room is filled with deadly tesla coils that zap you as you approach. Destroy them and collect all the items in the lab. The time machine is at the end of the long hallway, but you cannot access the control platform yet.

When you've grabbed all the useful items you need, head down into the basement and enter the portal to MAP02: A Dead Man's Party.

Once you get the green key from Dr. Femur, you can access her history class, office, and library. On the librarian's desk is the Mana Zoop weapon; the upper balcony cannot be accessed. The Skull is here as well, in the middle of the room on a tall pedestal.

Now talk to Professor Mengeler and he will give you access to his time machine. If he was killed, you can use the switch in his classroom to open the air vents and reach the control platform without the stairs. Dive into the time portal to MAP04: Totenhaus.

Third visit: Back to the Haunt[edit]

Return to Barlow's haunt with the blue key and speak to Dr. Femur again.

Now that the library stairs have been restored, climb them and grab the vitality serum to trigger the fight with the Skull: it springs to life and flies after you, spitting fireballs and cloning itself to confuse you. When it is destroyed, the pedestal lowers and gives you access to the Red Skull Orb. Take it back to MAP03: A Barlow in the Belfry.

When the Skull is destroyed, ghosts will no longer spawn on the school map.