MAP01: Terraforming Station is the first map of Mars War by Nathan Lineback. It uses a MIDI conversion of the tracker module "somewhere" by Sami Vuorensola (Equalizer). It was designed as a deathmatch level, and is almost entirely bereft of enemies in single-player and cooperative multiplayer.

This has been your home for the last several years. Before that you worked in the repair shop in Alpha Base across from the medical center. You have been desperately waiting for additional personnel. But there have been many delays so you are still stuck here all by yourself.

Day in and day out it is the same thing. The only thing of note recently is the slight rise in O2 levels at the lowest levels of the nearby river. And tiny robotic insects have been busy processing and fertilizing the soil enabling certain genetically enhanced plants to grow.

In preparation for the new personnel, you moved some of the larger equipment and supplies to a nearby cave.

You hear about the invasion from earth (can't they just leave mars alone?) and that something has gone wrong with their ships - their warp drives were garbage and mutated everyone on board. Then the communications black out came as people began to report hideous monsters attacking. Hours later you hear an out of control transport shuttle skid to a stop outside and several bizarre deformed troops - only vaguely recognizable as UOE troops - disembark.

You have a "berserk" pack and a pistol. Time to put a stop to this. 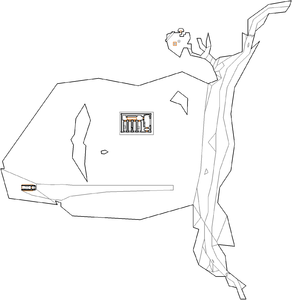 Map of Terraforming Station
Letters in italics refer to marked spots on the map. Sector, thing, and linedef numbers in boldface are secrets which count toward the end-of-level tally.

It is possible to jump behind the pillars at either end of the river. If you do so, you will be unable to escape unless you use the noclip cheat.

This map was originally supposed to be deathmatch, but only includes the single play or co-op play.