MAP01: The Ancient Navajo Wolf Warp is the first map of Ancient Aliens. It was designed by Paul DeBruyne (skillsaw) and uses the music track "Flee" once the player passes through the wolf warp tunnel (before this there is an ambient wind track). The par time is 1:10. 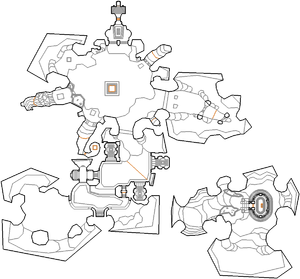 Map of The Ancient Navajo Wolf Warp
Letters in italics refer to marked spots on the map. Sector, thing, and linedef numbers in boldface are secrets which count toward the end-of-level tally.

You start in a separate area of the level. To begin the game collect five health bonuses and enter inside the house. In the house press use on any side of the table with the pipe on it. This will warp you to the main scene of the level.

Beware a cyberdemon in the new area. You need to avoid its attacks for now, so quickly head from the teleporter pad toward the south east ahead. Here, visit an alcove with a berserk pack inside (be noted this often may be lethal or at least will badly injury you, since the cyberdemon will fire rockets at you). Visiting the alcove will also release one former human but it is not a big problem compared to the cyberdemon.

Once you have taken the berserk pack a wall in the right part (east) will unlock revealing two imps. Run to the far east to take the megasphere. This spawns some demons but will also unlock another wall allowing access to the south part. Go there.

In the dry land come closer to a middle wall to open it. Destroy a former sergeant and ascend the stairs. At the top go ahead and turn to the right to find a switch. Press it and prepare for an ambush consisting of several enemies including revenants and a Hell knight (UV only).

The blue key is now unlocked. To get it return to the cyberdemon arena and find a wall to the west open. Enter inside and walk into the deepest part of it to find the skull key. Now you can exit the level by opening the blue door in the north. However, you may decide to destroy the cyberdemon before. For this read how to get secret#1 below.

* The vertex count without the effect of node building is 3286.