The Catwalk is a map that is part of the Master Levels for Doom II and is the fifth map of the first episode in the PlayStation Doom port. It was designed by Christen Klie, and is contained in the file CATWALK.WAD. 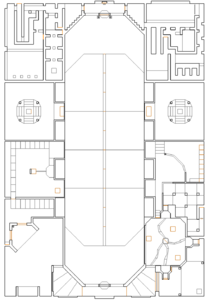 Map of The Catwalk
Letters in italics refer to marked spots on the map. Sector numbers in boldface are secrets which count toward the end-of-level tally.

From the starting position (A), head east. Platforms will start moving up and down. In the water cave-like area (B), step on the light lamp in the middle and press switches in the south, then in the east and finally at the north. Head to the east alcove where you have pressed the switch. In that place (C), drop down and press the switch to lower the yellow key stand. Return to the top (C) by pressing use on the computer panel and going through the cave (B).

Once you have got the yellow key, head to the western portion of the map through the starting place (A). Platforms will start moving up and down. At the small outside area, open either yellow door. Press the switch in the south to make a bridge in the slime area (D). Walk downstairs and, in the slime area (D), get to the bottom by continuing downstairs. Walk on the narrow bridge to the teleporter. Press the switch. This will lower two stands, one of which contains the red key. Use the teleporter again to return to the start (A).

Return to the cave (B) and use the northern alcove. Head to the southern part of this place where you will open the yellow skull bar and press the switch to reveal the northern place (it also unlocks the door in the beginning). Head to that small outside place. Press the switch in the south to build up a staircase. Lower the northernmost computer panel and get to the teleporter through the other panels. In the very similar but other place, grab the key and return to the teleporter.

Enter the freshly opened area to the tall slime pool area. Go on the bridge to the very north quickly, since it melts down to the pit, and you can no longer get back to the southern part and the places that are entered there. In the north, open the red door. Flip the switch for the end.

The door to the tall slime area can be opened once the player has the yellow key, but before they have the red key. If the player crosses the bridge across the area before picking up the red key (causing it to lower), they will become stuck on the far side and be unable to complete the map.

* The vertex count without the effect of node building is 1038.