MAP01: The Earth Base (No Rest for the Living)

MAP01: The Earth Base is the first map of No Rest for the Living. It was designed by Russell Meakim and uses the music track "Message For The Archvile". The par time is 1:15. 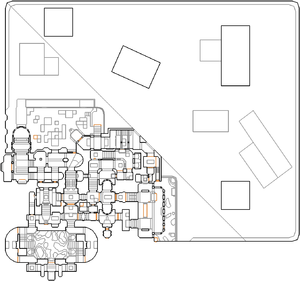 Map of The Earth Base
Letters in italics refer to marked spots on the map. Sector, thing, and linedef numbers in boldface are secrets which count toward the end-of-level tally.

After you take the red key, turn left and open the red door, go straight and through the courtyard, go upstairs, through the right hall to take the blue key. 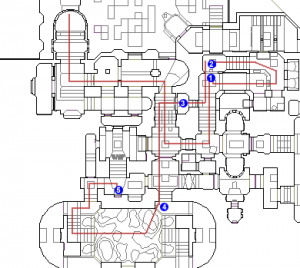 Route to the easteregg 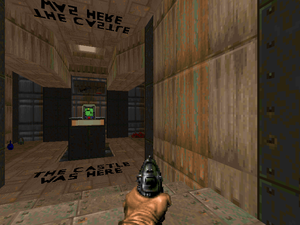 This map contains a hidden message from its designer. The message is THE CASTLE WAS HERE. Castle means Russell "The Castle" Meakim. To find it, you have to follow the exact route shown on the picture.

Note: You must reach the switch in under 30 seconds after the map starts.

There are seven secrets on the map:

Return to the hideout and ride up the lift to the north. Continue through the secret area to find a stream of enemies, a megaarmor at the secret's highest point, and a series of health/armor bonuses along with ammunition. Use the automap to plan your jumps from the megaarmor's point to reach the yellow keycard. The loading bays on the northern wall will lower, unleashing a large number of enemies. Grabbing the yellow keycard also has the effect of spawning enemies throughout the level, culminating in one (easy) or two (medium) cacodemons or even a pain elemental (hard skill) in front of the exit room.
At the southernmost point of the map is a garden with trees and soil mounds. Behind the westernmost wall is a yellow access switch; hit it to reveal an area holding the super shotgun, and an ambush of enemies.

* The vertex count without the effect of node building is 2835.