The Fistula is a map that is part of the Master Levels for Doom II. It was designed by Christen Klie, and is contained in the file FISTULA.WAD. In the PlayStation Doom port, it is the sixth map of the first episode and uses the music track "The Foulness Consumes". 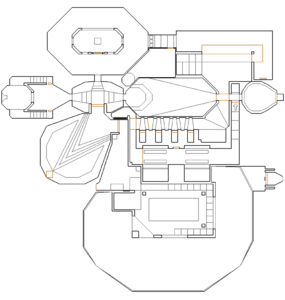 Map of The Fistula
Letters in italics refer to marked spots on the map. Sector numbers in boldface are secrets which count toward the end-of-level tally.

In the starting place (A), open the northern door (in fact, these are lifts masked as doors). At the intersection (B), head to the east and forth to the lift. Descend to the very bottom and go to the south. Head to the west and beware the trap of teleporting monsters. Use the lift, head to the south, come around and go to the very end at the east. Walk upstairs to the arrow that points to the wall. Open the wall and head to the area with nukage in the middle. Carefully walk around the border of the pit. If you fall, you cannot get out. Enter the teleporter. In the starting area (A), the teleporter with the yellow key has lowered. Take the key. You will be teleported back to the area with the nukage pool.

There are two ways to get the blue key. The first one described below is shorter, but you need to do a grab.

At the intersection (B), use the western way. Open either blue bar in the south or north and walk upstairs. Take the red skull key.

Come back to the starting area (A) and use the eastern door (the lift, more precisely). Press the green button in the west of the room to lower the platform. Get to the tall room with three columns and a staircase. Go outside, walk around and use the red key door in the east. If you are playing on the PC version of Doom, beware the arch-vile in the exit room. Press the switch.