The Garrison is a part of the Master Levels for Doom II. It was designed by Christen Klie, and is contained in the file GARRISON.WAD. 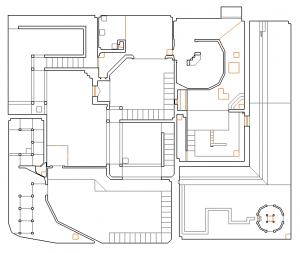 Map of The Garrison
Letters in italics refer to marked spots on the map. Sector numbers in boldface are secrets which count toward the end-of-level tally.

In the starting place (A), use the eastern stairs to descend. Enter the northern corridor, turn around and press the skull button to temporarily open a door. Go to the western side of the corridor. Imps will rise as you come closer. Enter the teleporter before the door is closed. In that room (B), press the button and re-enter the teleporter. In the starting area (A), use the southern way and continue until you find a staircase leading to a small area with the blue key revealed.

Return to the start (A) and use the eastern stairway. Enter the northern corridor, turn around and use the lift. Turn left and move along the corridor until you pass fast crushers. Walk on the narrow bridge located over the nukage pool (C) and press the button. This will lower several teleporters. You need the one that is near the crushers, the easternmost one. Walk up the small stairs towards it. The teleporter will bring you to the inaccessible stand with the red key on it.

Return to the starting place (A) and open the blue door at the northern area. Lower the large lift by pressing one of the two blue buttons. Drop down to the water pit and use the western alcove. Walk up the stairs. Go to the northern area (D). The yellow key is located on the pedestal at the bottom area. To get it, drop down from the staircase's railing above the pedestal.

Return to the place where you have taken the red key. Move along the corridor with the crushers. The second blue door is located at the bottom of the nukage pool (C). Open the door. Turn to your left and head to the northern side. There is an exit sign as if indicating that you need the red and yellow keys to proceed. Descend by the small stairs. Head to the south and, at the end, turn right and proceed to the west. Flip the lion switch to make up a bridge. Keep walking on it until you get to the exit structure. Open the bars. Press either of the four switches for the end.

Due to an altered node code in ZDoom, the player gets stuck after teleporting to the red key. No-clipping mode is needed to get away from the platform.