MAP01: The Gateway is the first map of Requiem. It was designed by Orin Flaharty, and uses the music track "The Rhythm of Carnage" by David "Tolwyn" Shaw.

Welcome to Requiem. First map out of thirty, and as expected, a nice steady ride.
Your objective is to travel through the small technology base, where the demons have used metal-like architecture and slayed [sic] human corpses together.
Find the exit just outside the base, and prepare for mission 2. 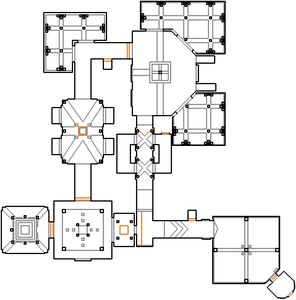 Map of The Gateway
Letters in italics refer to marked spots on the map. Sector numbers in boldface are secrets which count toward the end-of-level tally.

In cooperative multiplayer mode, Player 2 starts the level (and respawns) standing close to and facing a wall.

In the outdoors area outside of the northeast room, four linedefs (556, 651, 781, and 765) on either side of the northeast and southeast windows are double-sided without a back side, producing the Hall of Mirrors effect. However, these cannot be seen unless you activate the noclip cheat and walk outside through the windows.

* The vertex count without the effect of node building is 1048.