MAP01: The Teleporter is the first map of Memento Mori. It was designed by Michiel Rutting and Denis Möller, and uses the music track "Hidden Anger" by Mark Klem. 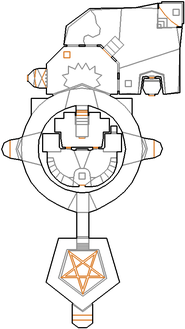 Map of The Teleporter
Letters in italics refer to marked spots on the map. Sector numbers in boldface are secrets which count toward the end-of-level tally.

* The vertex count without the effect of node building is 506.

Michiel Rutting designed the pentagram and the circular hallway. After sending Denis the incomplete level, however, he did not respond to any further e-mails by Denis. Because of this, Denis designed the rest of the level. It was created using DETH.[1]