MAP01: The Warp Facility is the first map of Claustrophobia 1024. It was designed by Eric Baker (The Green Herring) and uses the music track "Go Forth and Kill," composed by Baker specifically for the level. 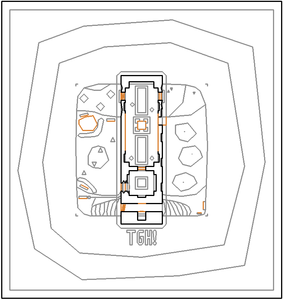 Map of The Warp Facility
Letters in italics refer to marked spots on the map. Sector numbers in boldface are secrets which count toward the end-of-level tally.

Open the door in front of you, and head through the door in the northeast of the next room. Turn south and shoot the button in the distance to create platforms. Cross the platforms and activate the lion switch at the other end to create a flight of stairs nearby. Head west and activate the next switch. Backtrack to the start of the level and head down the newly revealed elevator. Head outside, go to the northeast corner of the next room, and press the switch. Go southwest and hit the next switch, and then activate the switch at the northwest, which will cause a platform to rise beneath you. Grab the red key, open the red door, and head into the now accessible teleporter.

If you fall off the rising platform near the red key, press any side of it and it will function like an elevator.

It is possible to glide past the metal bars blocking the exit, ending the level immediately. Doing so, however, requires you to stand at a very precise location, without getting hit by any of the monsters in the room. Because the player start is aligned with this location, users of ZDoom versions prior to 2.7.0 as well as Skulltag and Zandronum can finish the level by picking up the shotgun, opening the first door, killing the zombieman in front of them, and running straight forward through the gaps. However, this is possible only because those ports fix the inaccurate trigonometry table to allow orthogonal movement. ZDoom 2.6.0 added a compatibility option, "Cannot travel straight NSEW", to undo the fix; and since 2.7.0, the fix is disabled automatically for this level.

* The vertex count without the effect of node building is 858.

This level began as a skeleton layout that Eric Baker created in September 2007, during the development of Community Chest 3.[1] On October 20, 2008, he signed up to Claustrophobia 1024 when the beta stage of development began, and developed the layout into a finished level, which he intended to be the megawad's first level.[2] He finished the first version of the level the following day.[3]

The arrows which appear after you activate the second lion switch were added after Baker allowed a friend of his to play the level in the megawad's first beta build, only for said friend to be unable to figure out where to go from that point in the level until Baker directed him to it.[4]

The first 51 seconds of this level's background music were created on February 26, 2008. On February 20, 2009, Baker finished the track for use in the third beta version of the level.[5] The music originally used in this level was a MIDI conversion of the song "Crystal Mountain" by Death.