Titan Manor is a map that is part of the Master Levels for Doom II. The map is set on the surface of Saturn's largest moon, Titan. It was designed by Jim Flynn, and is contained in the file MANOR.WAD. 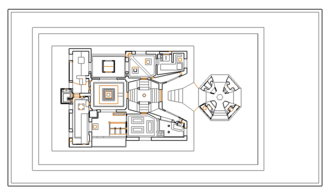 Map of Titan Manor
Letters in italics refer to marked spots on the map. Sector numbers in boldface are secrets which count toward the end-of-level tally.

From the start position enter the manor. Inside (A) walk upstairs to your right and open the door. A large arrow in the form of light points towards the north-western corner (B). Open the wall at that corner and use the lift. Walk forth on the long bridge and fall down on the sill of the window leading to the crate room (C). In that room if you walk near the blue door than an alcove containing enemies will open. Enter that alcove and press the skull switch to lower crate with yellow key.

In that crate room open the small wooden door. In the room with blue key (D) press the skull switch in the west to build the staircase about the blue key stand. Rise to the stand and press use on the baron depicted on the stand. This will build up the bridge that will help getting the key faster rather than walking from the southern and western side of this stand. Open the yellow door to get back to the entrance hall (A). Open the door to your right to get to the library (E). In the library go upstairs and open a secret wall in the fireplace. Press the switch there. This will lower a wall near the fireplace. Enter and go to the right and press the switch to temporarily lower the column in the middle in the entrance hall. While it is not risen just stand on it to temporarily lower that other stand with blue key. Through the yellow door run upstairs and take the blue key.

Return to the crate room (C). Lower the crate and open the blue door. In the very end of the room (F) there is a switch to lower a platform behind you. Use this platform to get to the higher level of this room and to enter the teleporter in the outside courtyard. In the very narrow and close room squeeze through the tunnel to get to a bedroom (G). Walk upstairs and jump over the platform with the column. Walk around the column and press the button to lower another platform before you. Press the second switch on that column to lower an alcove with red key inside.

Return to the room with the red door (F). Open a computer panel near the door (unless you have turned on the lights the computer panel is marked by an arrow). Press the skull switch to lower the brick wall blocking way behind the red door.

Although not very useful, it's possible to complete the level without getting the blue skull key. This can be accomplished by making a semi-difficult jump from Secret #4 where the plasma gun is located onto the platform with the pentagram teleporter. This will give the player access to the room that would normally require the blue key.