Trapped on Titan is a map that is part of the Master Levels for Doom II. It was designed by Jim Flynn, and is contained in the file TTRAP.WAD. 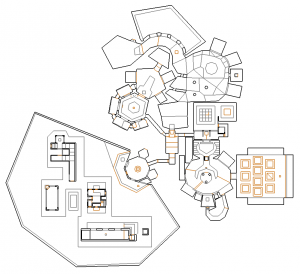 Map of Trapped on Titan
Letters in italics refer to marked spots on the map. Sector, thing, and linedef numbers in boldface are secrets which count toward the end-of-level tally.

There are in total three keys. You need the red and the yellow ones in order to beat this level, while the blue key is optional:

When playing a cooperative game, if you go to the outside portion of the map where the yellow key is located, and then you die before picking up the yellow key, you will respawn being unable to finish the map.

* The vertex count without the effect of node building is 1377.