MAP01: Trash Bay is the first map of Daedalus: Alien Defense. It was designed by Gary Gosson and uses the music track MM_02.MID by Rich Nagel. 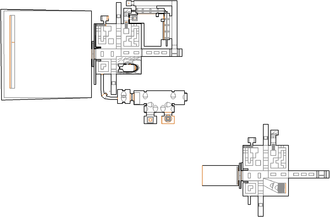 Map of Trash Bay
Letters in italics refer to marked spots on the map. Sector numbers in boldface are secrets which count toward the end-of-level tally.

Start of the game[edit]

Watch the opening cutscene, in which your shuttle from the doomed EDF Icarus encounters an enormous alien ship, enters it via the trash bay, crash-lands, and kills several of the crew in the collision. Press the switch next to the door to exit the shuttle. You'll get a message from an unknown ally within the ship, but just as they're about to reveal the critical details of what you have to do, the power to your translator dies.

Go to the south-west corner of the bay. At this point, more rubbish is being disposed into outer space via a conveyor - take care to jump over it while it is running. Follow the dark corridor round to a large double door, and watch out for the stealth imp that appears behind you. Open the door, and enter the travel tube to Engineering.

On entering, you fall down a shaft into water and receive a super shotgun. Jump to get out of the water, and drop down to the floor below. You will now be in the control room for a waste compactor. To exit it, turn on the compactor using the panel with the three triangles. The pillar behind your entry point turns out to be a ram that raises and rapidly falls. As it is raising, drop down the hole and QUICKLY move away to avoid getting crushed. You will now be back in the main trash bay, in a small alcove to one side.

A block of waste is blocking your exit; to move it out of the way, press the use button when standing next to it. Look to your right and jump across the conveyor belt - there is another block obstructing the entrance to another alcove. Move it and enter the alcove. Activate the command console inside, and one of the four command codes needed to finish the hub is revealed. Return to Kitchen, via Engineering.