MAP01: Ventilator is the first map of Community Chest 3. It was designed by Mike Alfredson (Use3D) and uses the Duke Nukem 3D music track "Water World." 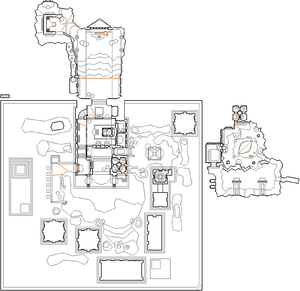 Map of Ventilator
Letters in italics refer to marked spots on the map. Sector, thing, and linedef numbers in boldface are secrets which count toward the end-of-level tally.

Climb the stairs up and come closer to a large building but do not enter it. Turn right and open a small door. Descend down. In the underground area, press the switch in the center of the room which is marked with red star shape at the bottom of it. Pressing it will raise the bridge to your left. Walk on it and enter an alcove to the other area. Here, advance on the linear path westward. Enter a small computer room to the north. Enter the door here. Not dropping down, turn right and grab the blue keycard. Now leave the underground area and go back to the outside where you have started the level.

Back in the outside area near the large building, go southwestward and press the switch marked with red star shape. This will build the staircase right before you. Climb on these stairs. At the top, turn right and enter the door. In the room, proceed north. If you turn right here, you can notice a panel marked with blue bars. Remember this place as you need to return here soon. Enter the door north which is opened automatically. Walk upstairs and enter a northern area. Go down into the water pool here. Turn left and enter a cave. A metallic pillar should lower revealing a teleporter pad. Use this teleporter. This will bring you right to the button mared with blue key bars and a red shape. Press it to lower the panel noted before. Backtrack to that panel by dropping down and heading southward. Go down on the stairs to the west on that have you previously risen. Turn left (east) and drop on the pillar with an imp (kill him first) and a button with a red shape. Press this button and quickly head into temporarily opened door in the southeast of the room as it closes soon. Grab the yellow keycard and leave this room.

With the yellow key, leave this room via the door in the south. You should be in the entrance of the building now. Press the switch with red shape to open the door leading to the east. Then, enter this opened door to find yourself in the eastern outside area. Enter the exit door in the southeast which requires yellow key. Enter an exit teleporter.

* The vertex count without the effect of node building is 3652.