MAP01: Water Facility is the first map of Congestion 1024. It was designed by Nick Laurent (hobomaster22). It uses the music track "Backroad Wanderer," composed by David Shaw, which originally appeared in Memento Mori II MAP10. 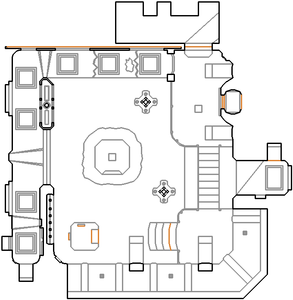 Map of Water Facility
Letters in italics refer to marked spots on the map. Sector numbers in boldface are secrets which count toward the end-of-level tally.

At the start, follow the hallway to the end and turn right. Drop down into the water, go around the platform in front of you and use the lift to the tower nearby. Flip the switch, fall down and go up the stairs in front of you. Turn left, cross the bridge, open the exit door to your right and press the switch to end the level.

It is possible to grab the megaarmor in secret #1 through the door before you open it by running into the door. No straferunning is required to pull this off, although it is best to start from the opposite wall.

This level does not actually follow the 1024×1024 map unit area restriction, as the exit and both of the secrets exist outside of that boundary.