MAP01: Xsshsss Zsss is the first map of MAYhem 2016. It was designed by Richard Frei (Tarnsman) and uses an untitled music track composed by Lewis Harvey (blueworrior). It uses the "...having a monster count of the map number multiplied by 10" restriction of the project. 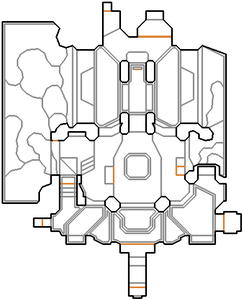 Map of Xsshsss Zsss
Letters in italics refer to marked spots on the map. Sector numbers in boldface are secrets which count toward the end-of-level tally.

From the start point, head left for the yellow key. Use the lift to go up, then go towards the yellow key switch area that was initially obscured by the arch-vile platform. After pressing the yellow key switch, head back to the starting area and go left. You should see a baron of Hell guarding a teleporter. Use the cyberdemon to kill him via monster infighting. You will then telefrag the aforementioned cyberdemon and a revenant, and finally land near a berserk pack. The arch-vile platform and the areas surrounding it (including the start area) will lower, revealing the exit containing a mancubus, as well as two additional revenants.