MAP01 is the first map of 2 Sectors. It was designed by Nuxius. 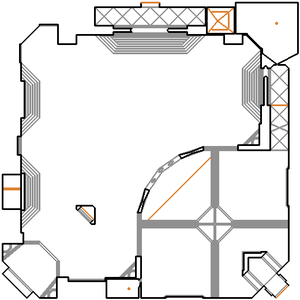 Take the shotgun and box of shotgun shells in front of you then kill all the enemies in the courtyard, including a mancubus behind the fence on your right. Go to the north wall to find a blue skull key next to a skull switch, pick it up and kill two demons and a cacodemon that try to ambush you then return to the start point and press the skull switch here. A set of bars will open nearby - kill a revenant and baron of Hell that appear then go through the gap in the fence to enter the mancubus' area.

The bars will close behind you - approach the marble face on the east wall then turn left and head into a narrow passage containing a red skull key. As soon as you take the key, turn left and kill a pain elemental and arachnotron visible through a small gap in the wall then leave the passage; you will be teleported back to the main courtyard. Go back to where you found the blue key and press the skull switch here to re-open the bars, then go back into the mancubus' area and look behind the two lion walls in this area to find a wooden skull switch. Press it to finish the level.