MAP01 is the first map of 99 Ways to Die. It was designed by Warren Marshall. 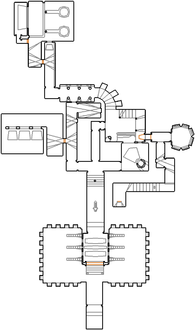 Enter the building and head straight north past the crossroads, until you're forced to turn right. Climb the stairs and go up the lift. On the upper level, take the passage to your right and follow it all the way to the exit switch.

Since the exit is directly accessible from the start, most areas in the level are optional: