MAP01 is the first level of Brotherhood of Ruin. It was designed by Kristian Aro and uses an original MIDI composition by Paul Corfiatis. 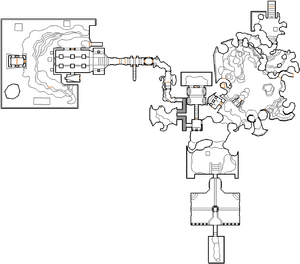 Follow the waterfall till you reach a chamber with a lone imp. Go north into the large outdoor area with a lava grotto on the right path. Remember this area for later. Head into the western shack and keep going west to a small open area with a switch behind the rocks. Flipping this switch opens a passageway in the shack you already went through. This small chamber holds another switch, hit it and return to the small open area again. Continue down the passageway, which should be open now, going west grabbing a super shotgun and then outside to a new outside area. Climb the rocks up and go into the small vine-covered hut to get the blue skull key and the chainsaw. Be on the lookout for cacodemons and demons as you exit. Now return all the way to the large outdoor area with lava and locate the blue door. Inside is a baron of Hell and a switch that removes the bar blocking the way to several ledges jutting out over the lava. Carefully maneuver and jump to the next ledge that has imps on it, and go through the caverns. When you reach a fork go right and find a small niche with a heavy weapon dude and a switch. This opens the exit on the left side of the fork.

* The vertex count without the effect of node building is 2561.