MAP01 is the first map of Dystopia 3. It was designed by Anthony "Adelusion" Czerwonka and Iikka "Fingers" Keränen, and uses the music track "I Sawed the Demons" from Doom's E2M1. 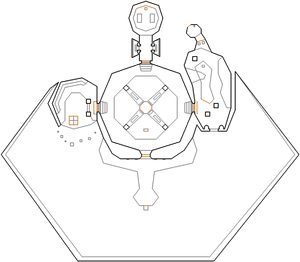 Take out the zombiemen in front of you and enter the building ahead. Kill the imp on the center pedestal, and grab the chainsaw. This will lower a switch in the northwest of the pedestal. Use it to kill the up to four demons in this main circular room. Flip the northwest switch to raise steps to the door in the north.

Once the demons are down, head through the door to an octagonal chamber in the north. Check the room for any remaining imps. Flip the switch and collect the blue key in the northwest corner.

Return to the pedestal in the big room. A switch has lowered in the southwest; flip it to raise steps through the blue door in the west. Head through the blue door. Kill the two zombiemen (three on Ultra-Violence and above). Head around the blocking wall and kill the shotgun guy. Up to six imps will teleport onto the green square with the yellow key - use well-placed shotgun shots to deal with them. Pick up the yellow key.

Return to the pedestal in the big room. A switch has lowered in the northeast; flip it to raise steps through the yellow door in the east. Walk into this next room, then walk back out. A switch will have appeared in the south of the big room; flip it. A Hell knight (Hurt me plenty and below) or a baron of Hell (Ultra-Violence and above) will teleport just east of the center pedestal. You probably do not have the ammo to kill it, so see if you can lure the former humans and imps in the eastern room out for some monster infighting.

Once the coast is clear, go back to the room in the east and head into the cave at the north end. Watch for an imp positioned for an ambush. Press the switch to exit the level.

In the eastern room, step into the lit part of the level from the southwest side. This lowers the blocking wall in the western room, allowing access to 2 medikits.