MAP01 is the first map of Istanbul. It was designed by Chris Mead. 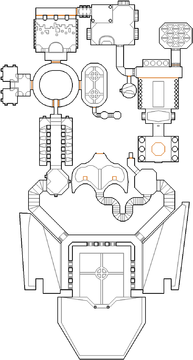 An armor (Thing 141) in the northwest has no flags set for any of the three difficulty classes, so it does not actually appear in the level. It is at the same spot as an armor bonus on skills 1-3, so probably was intended to appear on skills 4-5.

* The vertex count without the effect of node building is 2343.