The map makes use of several self-imposed limitations, inspired by older mapping projects: maximum playable area 1024x1024 map units, all vertices aligned to a 32 unit grid, only 5 wall textures and flats each, only 10 sectors, only two types of items (medikits and boxes of bullets), only one type of monster (the heavy weapon dude), and all of it made in under two hours. According to the author, "I used every map restrictions I've seen during my Doom experiences, except 1tag (but it's kinda close) and 100lines." 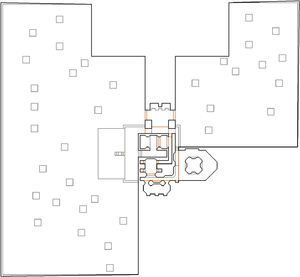 Map of 1024x32x10x10x3x2x1Monster
Letters in italics refer to marked spots on the map. Sector numbers in boldface are secrets which count toward the end-of-level tally.

Open the door in front of you and go to the end of the hallway. Open the white wall in there and enter the north-eastern opening. Go down the hallway, and when you come to the end, activate the lift to the north. Go up, get the blue key and get back down, then use the blue key to open the wide door next to the lift. Head into the T-shaped room and go through the door to the south-west (if the door is closed, open it by opening the white wall at the room's entrance.) Activate the wall with the EXIT sign.

Since all of the doors are the same sector, they all open at the same time; this can be used to the player's advantage. In particular the blue key can be skipped if the player runs through the blue key door before it closes.

This information was last verified in its entirety on December 18, 2014.

* The vertex count without the effect of node building is 437.