MAP02: Back at the Entry is the second map of 2048 Unleashed. It was designed by Chris Harriman (Impboy) and uses an untitled music track made by Paul Corfiatis. 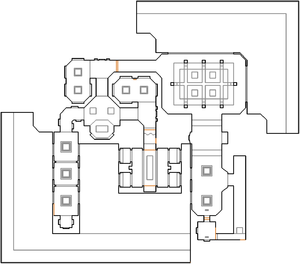 Map of Back at the Entry
Letters in italics refer to marked spots on the map. Sector, thing, and linedef numbers in boldface are secrets which count toward the end-of-level tally.

Kill the zombiemen and shotgun guy ahead then head forward until you go round a corner and see two more shotgun guys ahead. Head straight through the next room (taking a shotgun on your right if desired) and turn left at a junction to find a switch guarded by two imps and two demons. Press the switch then go back to the junction and head south through a now-open door to find another switch which will lower the lift next to it. Ride the lift up and kill a waiting demon, then enter the alcove at the south end of the room to collect the blue keycard. Entering the alcove will open four closets behind you containing chaingunners. Backtrack to the room with the shotgun and head north to another junction, then turn right and open a silver door (requiring the blue key) to enter a room with several demons and zombies. Head south from this room and kill any waiting imps and demons in the next corridor, then open the exit door at the south end of the corridor to confront one more imp - the exit switch is on the left as you enter the room.