MAP02: Beneath the Clay (Community Chest 64)

MAP02: Beneath the Clay is the second map of Community Chest 64. It was designed by Kore and uses the music track "". 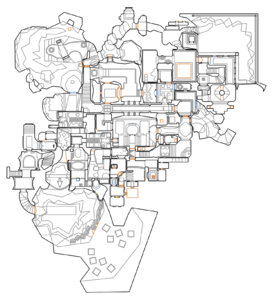 Map of Beneath the Clay
Letters in italics refer to marked spots on the map. Sector, thing, and linedef numbers in boldface are secrets which count toward the end-of-level tally.

Sector 777, despite being flagged as a secret, is a decorative zero-height sector that does not contain, nor does it lead to, any items or new paths. Because it cannot be reached in any way, obtaining 100% Secrets in this map is normally impossible.

* The vertex count without the effect of node building is 5309.