MAP02: Brick Break is the second map in the DMP2013L.wad mapset of the Doomworld Mega Project 2013. It was designed by C30N9 and uses the music track "Between Levels," originally composed by Robert Prince for Doom II. True to its name, the map mostly uses brick textures. 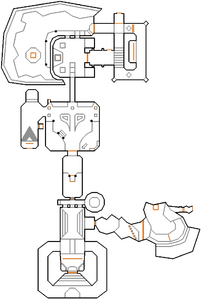 Map of Brick Break
Letters in italics refer to marked spots on the map. Sector numbers in boldface are secrets which count toward the end-of-level tally.

Head right and enter the outdoors area, then drop down into the water. Go around the river until you find the stairs; open the door, get the red key and head back down the bridge that will appear. Open the red bars in front of you, drop down into the water, press the switch behind you then another switch behind it. Get on the lift that will lower behind you. Head into the passage straight on, open the door, then press the switch to create stairs. Descend and flip the switch. Head back up, go down the newly revealed corridor and make your way to the very end. The wall will open and a bridge will appear. Open the door and enter the teleporter in this new outdoors area. You'll be teleported on top of the blue key. Press the switch, go outside, and open the blue door. Press the switch inside, then another switch accessible through a newly created staircase. Another staircase will form near the entrance to this area, allowing you to climb up on one of the ledges and shoot the switch on the far wall. Pillars will rise - run along them to get to the other ledge. Press the switch there.

Make you way back to the outdoor area with the river. A door has been revealed. Enter, get the yellow key, head down the bridge that will arise from the sludge, and exit the level.

This information was last verified in its entirety on March 19, 2015.