MAP02: Bustin Bones is the second map of The Twilight Zone. It was designed by Paul Corfiatis and uses the music track "Donna to the Rescue," originally composed by Robert Prince for Doom. The par time defined in MAPINFO is 1:30. 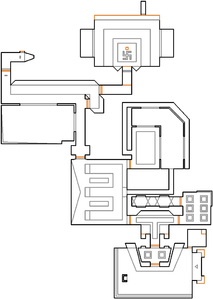 Map of Bustin Bones
Letters in italics refer to marked spots on the map. Sector numbers in boldface are secrets which count toward the end-of-level tally.

Progress through the level as normal collecting the blue and red keys along the way. In the NE part of the map is a Wolfenstein area which can be tricky. You go inside and get the yellow key, a door closes behind you and a deadly trap is revealed. There is plenty of ammo to get rid of the monsters. Along the northern end is a huge line of switches, in which one is the correct one. Press the wrong switch, and cyberdemons will attack you. In order to prevent this from happening, press the third switch (green arrow) from the left to escape the room. This is a preview to MAP23: Spaceswitch where this process is repeated many times.