MAP02: Coolant Platform is the second map of Community Chest 2. It was designed by Trevor Primmett (iori). 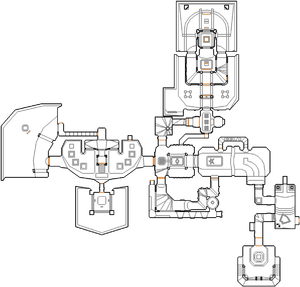 Map of Coolant Platform
Letters in italics refer to marked spots on the map. Sector, thing, and linedef numbers in boldface are secrets which count toward the end-of-level tally.

When you move from your starting point the doors will open. Outside, grab the shotgun and a switch will appear behind you. Press it and two more doors will open to the south. There is a switch on the right side of this U-shaped hallway; pressing it will allow access to another switch in the center. Press this one and the red key will appear in the U-shaped hallway to the north, along with a few monsters. You will have to go straight down to the red door at this point, as there are now walls blocking the left and right access points. Behind the red door, the next door will open for you. Take note of the soul sphere in the next room if you want to get it later, as it is secret #1. Approaching the next door triggers a door behind you with four monsters in it. The next room has a light fixture with the light rotating around the room and a lift. Going down the lift, you have to go straight across to the next door, but grab the chaingun in the nukage while you are here. Follow the next hallway and keep going. When you get to a switch, press it and take the door directly behind you. When you approach the yellow key, its pedestal will rise and the nukage walls will lower revealing spectres and a cacodemon. Climb either staircase and flip the switch to lower the key. Backtrack all the way to the yellow door, watching out for newer monsters along the way. You will find that the rooms with nukage connect back to where the chaingun is. Behind the yellow door is a W-shaped area with lots of monsters. Open the door on the opposite side of the room from the yellow door here and you will see an outdoor area with lots of monsters as well. Flip the switch here to raise up some stairs in the W-shaped room. Go back to them and run in order to get the blue keycard. The blue door is opposite of the keycard on ground level, and it holds the exit switch.

This level features a Doom Builder 3D Mode Start Thing (thing 120, type 32000) in the yellow keycard room. As it does not have any flags set, however, it will not be present on the map during gameplay, and no "Unknown Thing" error messages will be printed.

* The vertex count without the effect of node building is 2453.