MAP02: Court of the Crimson Schwing is the second map of 32in24-5, a deathmatch megawad. It was designed by Shaikoten and detailed by Andrew Apted with additional tweaks by Sarah Mancuso (esselfortium). It uses the music track "21st Century Schizoid Man" by King Crimson, sequenced to MIDI. The title of the level is a reference to the music track, which appeared on King Crimson's album, "In the Court of the Crimson King."

It was the seventh of eight initial layouts submitted to the project by Shaikoten, who posted the first version of the map twenty-two and a half hours into the session. 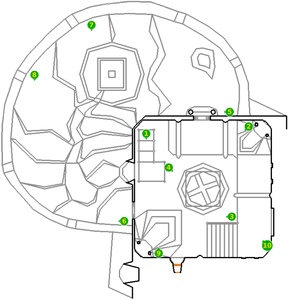 Map of Court of the Crimson Schwing, cropped to only show the playable area 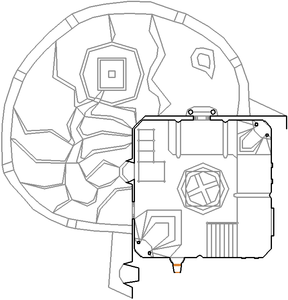 Map of Court of the Crimson Schwing, cropped to only show the playable area

Court of the Crimson Schwing is a small super shotgun-centred map, featuring a similar Gothic theme to Mongolesium before it. The level is comprised of a small square room of 1024x1024 map units, with two exits to a small outdoor area covering the north-west of the map area. The exit switch can be found through a small door along the south wall of the room. The marble part of the floor in the room's centre contains sixteen health bonuses and sixteen armor bonuses. In the south-east corner of the room, next to the billboard displaying the title screen from the first 32in24 is a staircase leading to an upper level that runs across the east and northern walls of the room. At the north-west corner, past the north exit to the outdoor area is a small gap which players can run across to reach a separated staircase leading to a small balcony overlooking the outdoor area, holding a BFG9000. It is possible to jump down to the outdoor area from this balcony.

The outdoor area has a small water feature near its north-west corner, around which players can find some shotgun shells. A leak in the water feature has carved a small river running southwards down the area towards the west entrance of the building. At the bottom of the river lies a backpack, which is the only other source of ammo in the map after the shotgun shells. A small patch of broken ground in the north-east corner of the outdoor area is where players can find a single medikit, the only source of health other than the sixteen health bonuses in the building.

This level contains ten spawn points, all of which except spawn #1 are placed on top of a super shotgun.