MAP02: Down Through (Sunlust)

MAP02: Down Through is the second map of Sunlust. It was designed by Daniel Jakobsson (dannebubinga), and uses the music track "Magician Type 0" from the game "The House of the Dead". 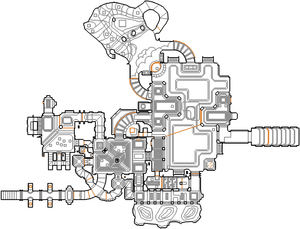 Map of Down Through
Letters in italics refer to marked spots on the map. Sector numbers in boldface are secrets which count toward the end-of-level tally.

First key: Go forward and take the shotgun. You will hear at least one swoosh sound produced by teleporting. You could glimpse enemies within the cages who have been actually teleported. They will return in combat later. Drop into the shaft ahead of you. Collect bonuses (optional) that will give you ten points to your health and armor. Press the skull. Eliminate imps and a sergeant and proceed to a room. In the room, ahead of you is a staircase. Go there and climb up. You eventually come to a large hall with slime on the floor. It does not hurt, so it is safe. You can drop there down and head to the left. You should notice a slimy waterfall. Go through it and you will be in a cave. However, beware an ambush of two chaingunners. Kill them first. A large group of imps and some other tough enemies will be here. Dispatch them and ascend the stairs to the top. Proceed on the tunnel way and take the blue keycard.

Second key: In the central main room, open the barrier which needs blue key and enter the teleporter. Follow the corridor to a door. Open the door to get to a slime room. One of the arch-viles has been unleashed here. It resurrects corpses, so first make efforts to kill him first. And when it is dead, kill the remaining ones. Between two orange panels, ascend the stairs. Go around and press the switch. An ambush behind you will open. Prepare for the three other ambushes. Kill the enemies and head to the trap room in which there is/was a mancubus or a Hell knight depending on your skill level, and press the skull switch here. Now, you can collect the yellow keycard. Go to the opened barriers and take the card. Be sure to find secret #2 if you want it.

Last part: Return to the central main room. In this room, the yellow door can be seen, however, is unreachable from here. Go back to the stairs leading to the slime hall. Drop down to the slime again. Head into passageway (a trap consisting of former sergeant will open to the left of you). In the south corridor, head to the right. Turn right and ascend the stairs. So, you eventually came to the door. Press the switch to open the door, as it is not opened manually. Enter the dark room with a cage. Pressing the skull switch is what you need here. There is also secret #3 can be found. In the slime hall, the platform linking the eastern and western parts of the level will be risen. Ascend the stairs in the main room. Fight the arch-vile and other enemies. Jump over to the platform and to the other side. Take a soulsphere and press the switch to open the door. Enter the door and descend down to finish the level.

An imp can get stuck on a conveyor belt and not be accessible to the player.

* The vertex count without the effect of node building is 6545.