MAP02: Dropp is the second map of 32 in 24, a deathmatch megawad. It was designed by Sarah Mancuso (esselfortium), and uses the music track "Into Sandy's City," composed by Robert Prince for Doom II.

This was the second submission to the project, and took Mancuso about two hours to build. It was her first ever deathmatch level, but she would go on to make at least one map for every subsequent 32in24 WAD, a distinction shared only with Matt Cibulas (RottKing). The level is named after the song of the same name by Autechre. 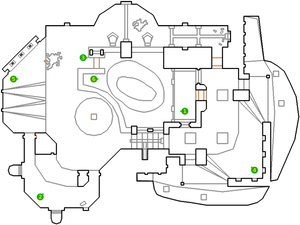 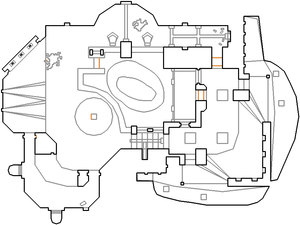 Dropp takes place in a fortress-like structure made predominantly of brick. The layout is far larger and more complex than that of the previous map.

The map features lots of open space, though the sparsity of cover varies with each area. The eastern section is completely indoors, and players are less exposed here, in contrast to much of the western section, which is outdoors and featuring very little cover, save for the sheltered south-west corner of the map. These areas form an almost continuous path around the map - which is obstructed only by a lift in the north-east corner - allowing players to run between them easily. Alternatively, players can also run across the centre of the map, though another lift is required to get to the higher western section from the east. The centre of the map is where players can find the level's only chaingun. The rocket launcher is clearly visible atop a metal column near the centre, it is accessed by pressing the switch on the western side of the column. Next to the central lift is a corpse hanging from a metal archway - behind it is the plasma gun. Players will notice this if they run along the northern passage. Super shotguns are mostly near spawn points, and ammo for all weapons is plentiful. Like the previous map though, health, armor, and power-ups are completely absent.