MAP02: Eastern Sun is the second map of Stardate 20X7. It was designed by Zachary Stephens (Ribbiks) and uses the music track "Eastern Sun," by SeraphSnake. The par time defined in the DEHACKED lump is 1:09. 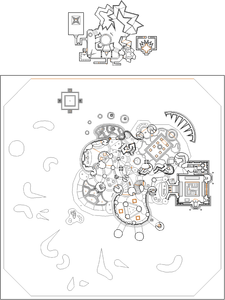 Map of Eastern Sun
Letters in italics refer to marked spots on the map. Sector numbers in boldface are secrets which count toward the end-of-level tally.

Two health bonuses (Things 207 and 208) are unreachable in the map, as they exist as part of the scenery. Only 97% items is possible on this map.

An imp (Thing 114) is in a cage next to a grave, but is not killable because the cage does not allow projectiles or hitscan attacks to pass through it.

* The vertex count without the effect of node building is 8910.