MAP02: Engineering is the second map of Daedalus: Alien Defense. It was designed by Jeromy Visser and uses the music track MM_03.MID by Rich Nagel. 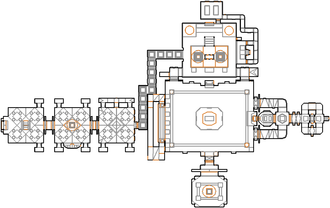 Open the double door, and activate both panels to disable the forcefield. The computer will respond in the alien language, but as your translator is offline, the message is incomprehensible. In the large room beyond, the structure in the centre of the room contains a shotgun, and a booth to the east contains a charger for your translator.

Go through one of the eastern doors, down the staircase, and through the door to the east (the one to the west is locked). This leads you into a T-shaped room with a barred alcove and central enclosure. Activate the two panels in the central enclosure to raise the bars, then activate the panel in the alcove. This will unlock the western door - go through it. Press the red switch inside to restore power to the rest of the area, and return to the big room.

Go through one of the northern doors and into the room beyond, which contains two dormant travel tubes. Enter the small door on the north side of the room and trip the switch inside; this will lower a lift within the room. Ride the lift to the top and go through the dark narrow corridor. Enter one of the doors at the end, and you will be on a balcony overlooking the room with the travel tubes. Trip both the switches in this room to power up the travel tubes. Do them one at a time, as tripping them causes chaingunners to teleport in! Return to the travel tube room.

Next to the travel tubes, there are two buttons marked with up and down arrows. Press the up arrow, and enter the eastern travel tube, which leads to Kitchen.

Although you've been summoned to the engine room, you will not be able to get far without the relevant security pass. Activate the travel tubes, and enter the western one, which leads to Sleeping Quarters.

As there is a fire in the engine core, the lights that previously were green are now red. Enter the doors on the western side of the room with the Engine Room travel tube, which lead into a room with two consoles. Activate both; the one on the wall puts out the fire in the engine core (and turns the lights yellow), and the one in the centre of the room powers up the travel tube to the bridge. Return to Engine Room.

* The vertex count without the effect of node building is 2884.