MAP02: Evil Admin is the second map of Going Down. It was designed by Cyriak Harris (mouldy), who also composed the music track, "Zombie Goes Shopping." 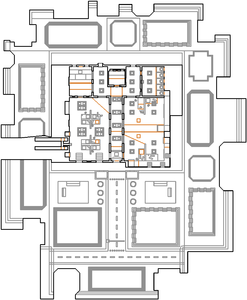 Map of Evil Admin
Letters in italics refer to marked spots on the map. Sector, thing, and linedef numbers in boldface are secrets which count toward the end-of-level tally.

When you destroy the explosive barrel on the crate in the southwestern room, other barrels will explode in an unreachable area with imps. If the barrels explode, imps will teleport to you.

* The vertex count without the effect of node building is 3472.