MAP02: Financial is the second map of DBP37: AUGER;ZENITH. It was designed by Jon Vail (40oz) and uses the music track "Resonance" by HOME, sequenced into a MIDI by Astolfo Alter. The par time defined in MAPINFO is 1:40. 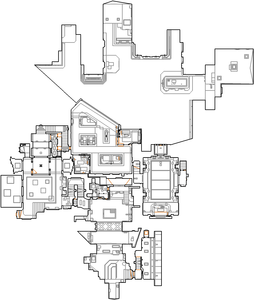 Map of Financial
Letters in italics refer to marked spots on the map. Sector, thing, and linedef numbers in boldface are secrets which count toward the end-of-level tally.

Enter the passageway on your left, climb the stairs, and use the barrier to leave the station. Head directly north and ascend the stairs guarded by the three zombiemen. Go through the door and climb another flight of stairs to reach a hand-scanner. Be careful because, once you use it, a cacodemon and a demon will be released.

Return downstairs and go west towards the tunnel. A switch has now been revealed which will raise the gate blocking the way forward. Head down the tunnel and you’ll reach a large open room. The button in the southwestern corner lowers the large elevator. Ride it upwards, but be careful of the heavy weapon dudes who will appear to the west and east as you ascend.

At the top, go up the stairs and enter through the door into the office. Go straight ahead to reach the manager’s corner office. A button behind the desk opens the locked door right outside of the manager’s room. Go through it and you’ll find yourself inside a lobby of sorts.

Pressing the button behind the receptionist’s desk on the south side of the room will trigger an ambush composed of revenants and heavy weapon dudes. Enter the small eastern chamber and press the button next to the grate to open the elevator. From here an arch-vile and several more heavy weapon dudes will emerge. Use the elevator to end the level.

* The vertex count without the effect of node building is 5400.