MAP02: Garden of the Descent is the second map of Congestion 1024. It was designed by Trevor Primmett (iori) and uses the intermission screen music from TNT: Evilution. 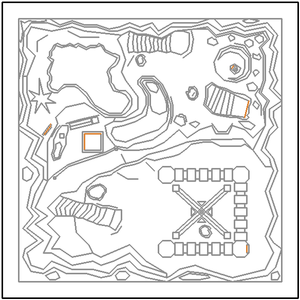 Map of Garden of the Descent
Letters in italics refer to marked spots on the map. Sector numbers in boldface are secrets which count toward the end-of-level tally.

At the start, face slightly left and continue forward. Step on the stones to reveal stairs to your right. At the bottom of the stairs is a switch: flip it to raise more stairs behind you. Climb up the new set of stairs and hop along the various tiny platforms until you reach solid ground. Continue forward to collect the chaingun then go up the stairs to your left. Once you reach the top, the blue key is just ahead. Grab the key and backtrack to the start of the level. To the left of the stairs going up is a switch requiring the blue key. Press it to open the door blocking the exit teleporter.

In front of the door blocking the exit is a small space that you cannot step in, even though you should be able to, until you open the door. This is a nodebuilding error caused by the then-current version of ZDBSP. When played in a non-ZDoom-based source port, the door texture itself (linedef 1365) is garbled; this is another nodebuilding error caused by that version of ZDBSP, which occasionally did not write a level's SEGS data correctly.

It is possible to fall behind the third and fourth pillars from the south in the northeast corner of the level (sectors 36 and 37) while attempting to navigate them. If this occurs, you will be unable to escape unless you use the noclip cheat.

Two shortcuts are possible in this level. While you supposedly must reveal the first switch before you can activate it, it is possible to activate the switch regardless by clicking at the air. In addition, while you are blocked from reaching the exit by a door at ground level and railing on the pathway, nothing stops you from jumping over the central mesa into the exit from the highest cliff in the level.

* The vertex count without the effect of node building is 1257.