MAP02: Gateway Lab is the second map of Hell Revealed. It was designed by Yonatan Donner. It uses the music track "Where Iz It?" from Rise of the Triad.

This is the lab on the other side. Still no heavy resistance.

This level is excellent for deathmatch - there is a separate deathmatch area. So happy frags! 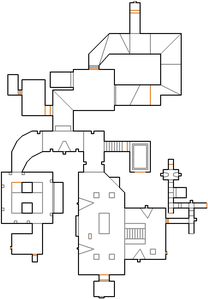 Take the lift up to the open corridor. Run down the stairs to the right and head through the door at the bottom. Follow the narrow passages, hitting switches to reveal further paths, until you reach the blue key. Head back to the start. After climbing the stairs, head to the right. The passage will turn left and continue curving in this direction, follow it until you reach a square room with a lift to a raised section in the middle. Take the lift, and a new room will be revealed you can jump to. Hit the switch.

Some way behind you a section of wall will just have lifted. Head back to this section, and you should find a blue key door. Beyond that the passageway will branch off to the left, head down here and hit the switch. Continue to follow the passage around and it will bring you back where you came from. Head back to the start of the level, near the lift a small patch of floor will have risen revealing a switch. Hit this and at the end of the open corridor stairs will raise to the exit. Run up the stairs, open the last door, and hit the exit switch.

On the right of the stairs at the start of the level is a raised platform containing a shotgun. A switch on the wall beside lowers the platform down to the player, but the shotgun can also be reached by a strafejump from the right wall alongside the stairway.

In the large room in front of the blue key door there is a lift on the left hand wall. This leads to two more rooms, in the second of which is a chaingun.

The blue key door is misleadingly decorated: it can be opened without any keys at all.

The multiplayer starts on this level are in an entirely separate area from the single player section of the level, the layout of which is based closely on MAP25: Dead Progressive.

When playing this level speedrun style, the blue key area can be skipped entirely. There is a blue key door later in the level, but it doesn't require any keys to open. In this section of the level there is also a blue key switch, but all this does is raise a section of the level near the start revealing a switch to raise the stairs to the exit. Due to the linedefs can be activated regardless of player's Z position bug this switch can be activated while still hidden. On this route it is still necessary to run to the blue key switch however, as this raises a sector blocking access to the exit switch. [1]

The blocking sector has a 32-unit gap on its right hand side however, making a glide possible which cuts out nearly all the level. This was first shown in 2006 by cack_handed. [2] This demo uses a second glide to the exit, but in fact the exit switch is wide enough that it can be pressed from the against the right hand wall. This demo was also the first to show the level being completed pacifist style.

Due to the high number of hitscan enemies this level was not completed Nightmare! style until the glide was discovered. [3] This demo takes the left hand route around the blocking sector and features three consecutive glides.

Maxkill demos feature few tricks on this level, the principal time-saver is to run for the super shotgun as soon as possible to dispose of the remaining enemies faster. The blue key is picked up at the start and the exit stairs switch pressed while still hidden, to prevent the player from having to revisit this area. [4] The same route is used on -fast demos, except the greater threat posed by hitscan enemies and fast demons means the super shotgun will be left for later when it's safe to pick up. [5]

UV -respawn demos can be optimized by skipping the blue key area entirely, as well as the lift leading to the chaingun. Theoretically the demons could also be skipped in favor of killing sargeants and imps, but the level is too crowded and lacking in health for this to work properly. [6]

There is no berserk pack for Tyson, but there are plenty of imps and demons which can be punched out with non-berserk fist. Combined with plenty of opportunities for provoking infights at little health cost to the player this makes the small number of bullets on the level more than sufficient. [7] 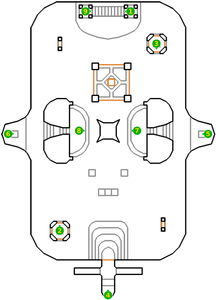