MAP02: Hangar is the second map of 10 Sectors. It was designed by Øystein Langhelle. The map is set in a warehouse facility. 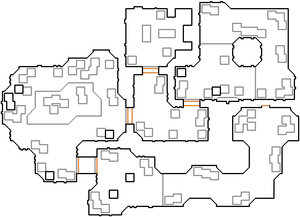 A few zombies are in the starting room, so kill them and grab the berserk pack in the corner. Open the door and go around, ignoring the blue door for now. The next room has a few enemies, as well as the blue key. There is a super shotgun hiding behind one of the crates here. Return to the blue door and open it, disposing of the enemies inside. There is a lift you can use to head up. At the top, follow the path killing enemies until you reach the exit switch.

As this map contains no secrets, the NM100S category is redundant for this map.

The map was inspired by the song "Hangar 18" by Megadeth. The level was also partially influenced by Quake II and The Darkening Episode 2.