MAP02: Hangar of Evil is the second map of 1 Monster. It was designed by Kim Bach (Torn) with later edits by scwiba, and uses the song "Kitchen Ace (And Taking Names)" from Doom.

Like all maps in the megawad, the map features only one type of monster, in this case the imp. It is set in a bright E1-styled techbase facility. 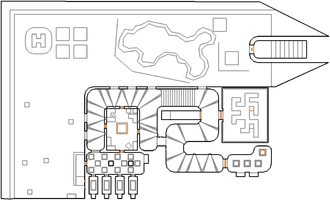 Map of Hangar of Evil
Letters in italics refer to marked spots on the map. Sector, thing, and linedef numbers in boldface are secrets which count toward the end-of-level tally.

The map is fairly straightforward. From the beginning head on, getting the shotgun and the armor on the way, and proceed down the white hallway and downstairs until you come to a door behind which is the red key; picking it up will teleport in new imps into the room and the corridor. Open the red key door which you passed on your way. Inside, find the blue key, which will cause the computer mainframe to lower and reveal a number of imps. Leave, head back upstairs, and open one of the blue key doors. Grab the yellow key and head back to the starting location, where you will find the yellow key door. Leave through it and jump down. The brown building at the end of this outdoor area contains the exit.

There is a lift in the main corridor which can be used as a shortcut between its two parts.

It is possible to keep imps from teleporting in after grabbing the red key, if one avoids shooting in the main corridor, or any area connected to it via an open door. However, this is very difficult to pull off in practice because of the crowds of imps in the corridor, who tend to keep opening the door to the red key room if left alive.