MAP02: Harm's Way is the second level of Harmony. It was designed by Thomas van der Velden (t.v.) and uses the music track "Untitled" by Kyū. The par time defined in MAPINFO is 2:05. 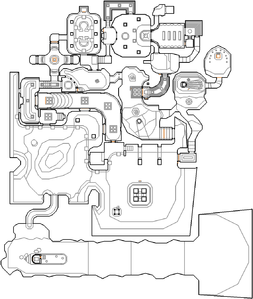 Map of Harm's Way
Letters in italics refer to marked spots on the map. Sector, thing, and linedef numbers in boldface are secrets which count toward the end-of-level tally.

1. You start out next to your ship in front of a tunnel. Follow this tunnel until you enter the courtyard.

2. Enemies will start shooting at you. 2 of them are hard to reach at this point, so go straight for the building. Enter the left door. Inside the building, turn to the left (turning to the right only leads to the right door and a locked door to a later part of the level)

3. After the door on top of the stairs, turn left to kill 2 of the courtyard snipers and collect a red armor. After that, follow the hallway. You can kill a guard in a small overwatch and snipe some enemies from it. After that, drop down into a brick area just in front of this overwatch.

4. Press the switch in this plus-shaped room. Enemies will ambush you from all sides. Kill them and progress onwards.

5. You will arrive at an altar. Collect the item on it and fight the appearing Predator. The door just across the altar room is open now. Turn left instantly and you will find another small overwatch. You can see a rocket from here. Kill the enemies and enter the room.

7. Follow this hallway, but be alarmed. You will be close to a church with a lot of enemies. Dispatch them and don't forget the enemy in a small overwatch left from the entrance into the church. Afterwards, pull the lever in the overwatch and the rocket will descend into this area, accompanied by the green key. Collect it.

8. Go through the green door and follow the hallway. The switch calls an elevator with a number of enemies on it. After riding the elevator, you have a shortcut back to the altar room towards the right. Progress to the left into a small garden area with a blue door. This area also contains a shortcut back to the beginning of the level if you continue forward from the start and enter the first door on the right.

10. Continue through the door to the first switch. This switch will light the fire in the grey chimney and trigger an ambush. You can collect some ammunition by backtracking a few steps and investigating the small indentation you passed when going to the switch. Afterwards, continue through the door in the brick wall to the exit of the level.

* The vertex count without the effect of node building is 3452.