MAP02: Hell's Lamentation is the second level of Resurgence. It was designed by Josh Sealy (Joshy) and uses the music track "Trainwreck" by James Paddock. Keeping the same theme as MAP01, Hell's Lamentation sees the player delve deeper into a network of caves inside Hell. 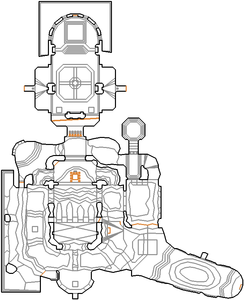 Map of Hell's Lamentation
Letters in italics refer to marked spots on the map. Sector, thing, and linedef numbers in boldface are secrets which count toward the end-of-level tally.

When you start the level, you will be promptly attacked by several monsters, including a demon, so it is important that you move quickly. Pick up the berserk pack on the floor in front of you, and take either of the two paths leading to the north end of the cave. Turn into the central section, and run past the pillars to where the imps are attacking from at the start, and retrieve the shotgun. Now go back past the pillars and turn right, then head over to the area opposite, and go up the steps. Turn right again and make your way forward. When you pass under the low overhanging rock, beware of several troopers and sergeants that appear in front of you, and the arachnotron in the lava pool to your left (this is replaced by a group of imps on Hey, Not Too Rough and lower skill levels). Clear these monsters and quickly run across the lava, and hit the switch on the other side.

Turn around and cross the lava again, and you should see that a brown platform has risen in front of you, which can be lowered with the use key to access a higher area of the cave. Eliminate the imps on the ledge, then take the platform to get up there. Go into the small hole and after you kill the troopers on top of the pillars, run across to the other side. As you emerge on to this next ledge, go over the fourth pillar across the west path from the start area, and turn left to retrieve the blue skull. Run all the way back along this path, and press the switch to open the panel the switch is placed on. Follow this tunnel round, and open the blue skull bars.

Going past the blue bars brings you into a relatively large Gothic-themed area. This is populated by a large number of monsters, including a revenant, so caution is advised. Clear the monsters, then go up the stairs at the far end of the room, and press the switch in front of you. This will lower the plinth which the yellow skull is sitting on. Monsters will begin to teleport into the room. Take the key, then press the switches found in small tunnels behind the large pillars on the left and right hand sides of the room. This allows you to leave the Gothic area and return to the caves.

When you leave the Gothic area, go straight on towards the yellow bars. Open the bars, then step on the teleporter to exit.