MAP02: High Voltage is the second map of Hell Revealed II. It was designed by Jonas Feragen and uses the music track "The Saver of the World," by Petter Mårtensen (Thyrbse). 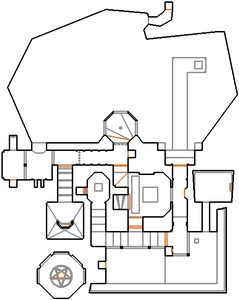 Map of High Voltage
Letters in italics refer to marked spots on the map. Sector, thing, and linedef numbers in boldface are secrets which count toward the end-of-level tally.

Kill the baron of Hell and shotgun guys at the start. Open the door and kill the former humans up ahead. At the end of the hallway is a door and a switch. Make sure to press the switch, then open the door and kill a few imps. Take the next right to a door leading to a computer room with Hell knights and a super shotgun. Open the wall labeled "UAC" at the northwest end of this room and kill the demons. Take the nearby teleporter to head to the grassy area where a few zombiemen were located. You will find the yellow keycard here, if you pressed the switch from before, as well as a path leading to imps and Hell knights guarding a switch. Make sure to flip this switch, then teleport out of this area. Look to your right to find the bars blocking the blue keycard are gone now. Two barons of Hell will ambush you when you pick up the key. After that, return to the hallway that had imps in it, and keep going down the steps to a watery enclave with demons. Open the blue door for a teleporter. Take out the Hell knights and cacodemon on the other side, then press the switch. Teleport back, then return to where you found the blue key and head west, through another open passage. Kill the shotgun guys behind the yellow door and exit.