MAP02: Human BBQ is the second map of TNT: Evilution. It was designed by John Wakelin and uses a music track shared with MAP15: Dead Zone. The title possibly refers to the start of the level, which features a twitching corpse roasting over some burning barrels. In the Sony PlayStation version of Final Doom, it is known as Human Barbeque. 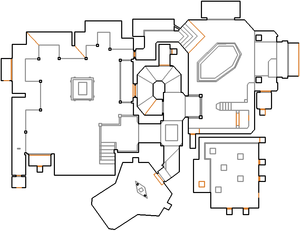 Map of Human BBQ
Letters in italics refer to marked spots on the map. Sector, thing, and linedef numbers in boldface are secrets which count toward the end-of-level tally.

Rush to the stone barrier behind the human barbecue and press on it. Enter the passageway, run north, and climb up the staircase to find the red keycard. Backtrack to the pool of brown sludge and run west. Go downstairs, and run to the red door in the north-east. Open it, and go through the passageway to a large room with a water pool. Run south, and flip the switch at the south-east to open the upper windows; be careful, however, of the enemies revealed as a result. Retrace your steps to the brown sludge pool, and do a running jump through the eastern window onto the stone stairway - make sure you are standing far away before doing so, or the jump will fail. Go around to the south-west and grab the yellow keycard. Backtrack to where you found the red key, and open the yellow door. Jump over to the northern walkway, and make your way to the south-west. Open the door, and hit the exit switch.

The level uses two types of self-referencing sector effects. The first is used on the backpack pool to create the illusion of deep water. The second is used on the windows nearby to create transparent barriers which the player can (and must) open.