Unchecked
This level occupies the map slot MAP02. For other maps which occupy this slot, see Category:MAP02.

Map02: Human Processing is the second map of Project Einherjar, designed by Impie in 2016 and constructed in Doom Builder 2. 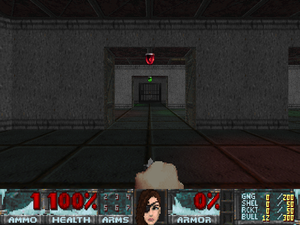 Juno starts in the processing area, with several imprisoned human subjects. At the end of a snaking network of hallways is the massive processing unit: a humming collection of stasis tanks containing unconscious test subjects. The large door in this area connects the lab to the garage, which acts as a bridge between the south and north halves of the map.

Two doors in the garage lead to different areas of the office block. The north door leads through the lobby and eventually to a rooftop truck yard, where Juno will find the blue door and exit door. An Amazon Commando squad guards the yellow key here, along with two small platoons of assorted troops. Both battles are tricky since the large number of parked trucks helps to scatter the active troops and makes it tough to keep track of everyone present.

The east garage door leads directly to a small lab: the blue key and blue armor are behind their own respective yellow doors. To get the blue key, Juno has to turn off the processing unit, killing the test subjects contained therein. The switch beyond the blue door opens the way to the exit switch.