MAP02: In The Hall Of The Mountain Kings (ASDOOMII)

MAP02: In The Hall Of The Mountain Kings is the second map of ASDOOMII. It was designed by Andy Sheppard. 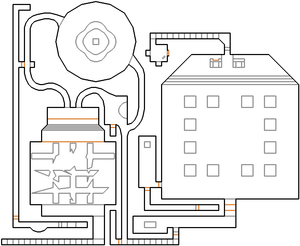 Map of In The Hall Of The Mountain Kings
Letters in italics refer to marked spots on the map. Sector, thing, and linedef numbers in boldface are secrets which count toward the end-of-level tally.

The following multiplayer-only objects have no flags set for any of the three difficulty classes, so they do not actually appear in the level: one chaingun (Thing 143), five shotguns (145 through 148 and 151), and three boxes of shotgun shells (152 through 154).