MAP02: Ion Storm is the second map of Community Chest 3. It was designed by Ronald Lubbelinkhof (Dutch Devil) and uses the music track 279.mid by Rachel Schmitz (Negatronica). 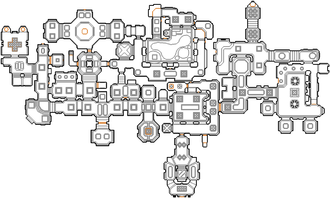 Map of Ion Storm
Letters in italics refer to marked spots on the map. Sector, thing, and linedef numbers in boldface are secrets which count toward the end-of-level tally.

Enter the door and head left in the corridor. Walk up the stairs. Turn right and press the switch to open the door. Enter this door. In the next room, climb the stairs northeast. Take the door in the east here. You can see a red door in this room. Proceed eastward to the other end of the room. Turn left and press the switch to make the lift work. You can now enter an outside area. Press the green button to open the door, then enter it. Use the lift to get into room higher. Take the red keycard right in this room. After that you can press the switch near you which requires the just collected key. This, however, open several traps around. Get back to the outside area. Use the lift again to get to the previous room and go to the red door which is opened now. Go down and flip the switch that also requires the red key. Pressing this switch unlocks the door to the eastern portions of the map.

Backtrack to the very beginning of the level. Proceed to the east to find the red door open. Enter the room with green walls ahead. Press the switch in the north of the room to lower the lift. When you get higher on the lift go around the corridor to the southwestern part of it and open the door there. Take either staircase and press the switch in the south of the room. Return to entrance of the room to find the large door open and a yellow key accessible. Get the yellow keycard.

With all the keys collected backtrack to the very beginning of the level. Head left in the familiar corridor. Walk up the stairs. Open the blue door in the northern end and flip the switch to exit.

* The vertex count without the effect of node building is 6118.