MAP02: Jungle Spirits is the second map of Plutonia 2. It was designed by Adolf Vojta (Gusta), and uses the music track "Bloody Hell" by Jamie Robertson. The par time defined in MAPINFO is 1:30. 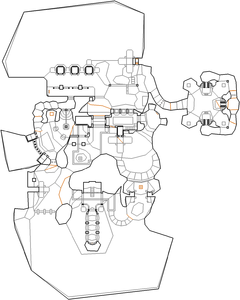 Map of Jungle Spirits
Letters in italics refer to marked spots on the map. Sector numbers in boldface are secrets which count toward the end-of-level tally.

You will be ambushed by enemies at the start, so kill all that you can. When you are satisfied, head east from the start and hop into the large water pool. Go north from there to find a gargoyle switch. Press it and take the stairs to the south back up to the start. Look north and you will find some stairs. There is an opening to the right of the stairs, enter it if you have not done so already. Inside, there should be some stairs leading up, so climb them to get the yellow skull key. Many enemies will teleport into the map, and also the wall up ahead will lower, which reveals the exit. After you are done killing the enemies, head up the stairs from the start and head right. There is a small set of steps you can climb to reach the yellow door. Open it and press the switch inside, then head east through the tunnel. It will empty out in a small area with a few monsters. The red skull key is in this area, so climb the steps and head around to pick it up. More monsters will appear in this area, so dispose of them and leave the area. West of the yellow door and in the water you will find the red switch. Press it to open the nearby bars, but look out for the ambushing enemies as you do. Follow the path, looking out for teleporting cacodemons as you cross to the south. The next set of bars will open for you, and outside again you will be ambushed. After disposing of the enemies, head straight east until the path forks right. Take it to a Hell knight guarding a switch. The switch raises a step that leads to the exit. Climb up, kill the mancubi, and leave the level.

* The vertex count without the effect of node building is 1981.