MAP02: Maskim Xul is the second map of Maskim Xul. It was designed by James Caldwell (Obsidian) and uses the music track "The Library of Nightmares," composed for the level by Tristan Clark. In ZDoom-based source ports, an OGG version of the music track with higher-quality virtual instruments will play instead of the MIDI.

"Maskim xul" is supposedly a phrase from ancient Sumerian, meaning "demon who lies in wait"[1]. 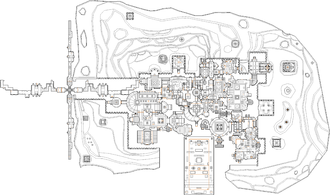 Map of Maskim Xul
Letters in italics refer to marked spots on the map. Sector, thing, and linedef numbers in boldface are secrets which count toward the end-of-level tally.

* The vertex count without the effect of node building is 21680.