MAP02: No Rush is the second map of Valiant. It was designed by Paul DeBruyne (skillsaw) and uses the music track "Cold Wires," originally composed by Stuart Rynn (stewboy) for Speed of Doom. The par time is 1:45. 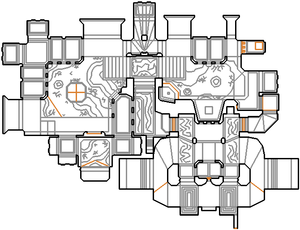 Map of No Rush
Letters in italics refer to marked spots on the map. Sector, thing, and linedef numbers in boldface are secrets which count toward the end-of-level tally.

Kill the shotgun guy and super imps on the ledge ahead of you then head down the north-west steps to a yard with a fountain, which is overlooked by more zombies and imps. Take the shotgun and armor in the south-west corner if you need them (which will cause imps to teleport to the fountain), then go up the steps to the covered ledge on the east side. Follow the gray path west, north and east until you reach the ledge with the red keycard that you saw at the start, collect it then drop to the ground and head down the north-west steps again. This time, turn left to enter a pool of water then turn left again to find a red key door.

Go through the door and kill any waiting imps, shotgun guys and lost souls then drop into the water trench on your right and go round to its south side to find a super chaingun. Use it to mow down the imps, chaingunners and super demons (or pain elementals on Ultra-Violence (UV) and Nightmare (NM) skill levels) that are released from closets to the east and west, then press the button opposite the chaingun to lower a pair of lifts that lead up to the blue keycard. Flip the switch opposite the keycard to raise a bridge leading back to the north side of the room, but use caution as it will allow a demon to teleport in along with four (depending on skill level) zombiemen, imps or chaingunners. Cross the bridge and turn right to open a blue key door ahead of you, then follow the tunnel to a lift that you can activate by pressing it.

Ride the lift up to a ledge overlooking the starting area, then pull the lever ahead of you - this will allow you to reach the yellow keycard in the south-west corner but will also release a number of monsters into the map, including one or two cacodemons behind you. Take the yellow key then retrace your steps to the ledge where you found the red key, killing any monsters that block your path, then head east to some yellow bars. Open them and step on the red X to finish the level.

A rocket launcher can be found south of the area with the fountain, guarded by three imps (or a mancubus on UV and NM). Taking the weapon will open three closets around you containing two demons, an imp and a chaingunner.

* The vertex count without the effect of node building is 1924.