MAP02: Not Applicable is the second map of NDCP2. It was designed by Mark Pedersen (Macro11_1) and uses the music track "". 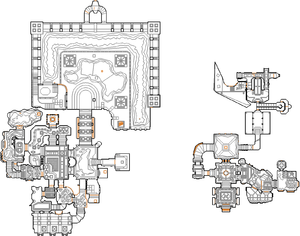 Map of Not Applicable
Letters in italics refer to marked spots on the map. Sector, thing, and linedef numbers in boldface are secrets which count toward the end-of-level tally.

In the original version of this map, the room containing the yellow key could not be escaped and the map could not be completed without cheats. An unofficial but commonly used patch for the level contained in ndcp2v2.wad fixes the issue.

* The vertex count without the effect of node building is 14774.