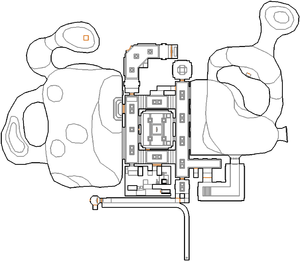 Map of Nukem
Letters in italics refer to marked spots on the map. Sector, thing, and linedef numbers in boldface are secrets which count toward the end-of-level tally.

Open the door in front of you and head straight forward until you see a doorway on your left. Pass through it then go south-east and step over the edge to drop to a ledge with ammo and a radiation shielding suit. Take this item then drop into the nukage, turn left and head into the tunnel in front of you. Turn right to see a ledge with three imps who a guarding a switch - flip the switch, then turn round and head into a round cavern containing the red keycard.

Go back outside and head south to another doorway in a gray wall, go through it and follow the nukage to a set of steps guarded by several monsters. Climb the steps and turn right to see a lift which will take you back up to the blue-floored area. Turn left and go down the steps in front of you, then turn right to see a switch with red key markings between two doors. Press the switch to open the doors and step through to find the yellow keycard sitting on a grate. When you take the yellow key a wall will rise around you and two shotgun guys will be revealed (replaced by chaingunners on Hurt Me Plenty (HMP) skill level or higher). Shoot the switch that is revealed in the south-west corner of the room to free yourself.

Leave the room and go back up the steps, then turn right to see a door with yellow key markings in front of you. Open it and kill the two chaingunners waiting in the next room, then go down the left-hand hole and turn right to drop down a ledge to a medikit (this is secret #6). When you drop down the next hole you will need to move quickly - there is a line of barrels on the left which will explode after a few seconds, killing anything standing in the corridor. Drop down the hole and run forward, killing two imps on the way to the exit door. Go through it and throw the switch in the wall to finish the level. (If you missed anything, you can use the teleporter in the exit room to return to the start.)

Leave the starting room and turn right to go down some steps, then go through the tan door on your right. Follow the passage behind the door round to a blue keycard, which is needed to reach secret #5. Approaching the key will activate two crushing ceilings in the passage, and five monsters will teleport in to the area between the crushers.

A chaingun can be found in the yellow key room on HMP or lower.

This level contains the following weapons and items:

* The vertex count without the effect of node building is 1572.